Disorder In the Court

The Trial of the Chicago 7 is streaming on Netflix

There’s a long and semi-proud tradition in Hollywood of the courtroom movie. Some of them, such as To Kill a Mockingbird, The Verdict, and 12 Angry Men stand the test of time.* They have something particular to say about the law, about justice, and how we either uphold our ideals or abandon them altogether. 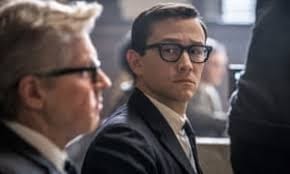 Here’s the thing about making a courtroom movie…they’re hard. The first problem before you is the script. Ever read legal transcripts? If not, they’re a very effective substitution for valium. Your first challenge is to hack through a thicket of impenetrable legal jargon and make it relatable from an emotional standpoint. After that, you’ll need to reckon with a very serious directorial challenge. Most moments taking place in courtrooms are not what I would characterize as dynamic. A person in a suit sits at a desk, then walks around a very small area talking to another person in a suit. Other people in suits observe, while a person in a long black dress looks on and occasionally hits a desk with a hammer. There’s no car chases, no werewolves leaping from the jury box, no fistfights between attorneys.**

The best courtroom movies feature clever writing, finely calibrated acting, and direction that’s able to move past the legal minutiae and create a real sense of momentum. Aaron Sorkin knows a thing or two about that, having written the script for A Few Good Men. Back in 2007, he wrote a screenplay about the rioting during the 1968 Democratic Convention and the legal proceedings that came after. Steven Spielberg was going to direct, then Ben Stiller, then Paul Greengrass. Finally, the universe turned in Sorkin’s direction and he was given the opportunity to direct. The end result is The Trial of the Chicago 7, a film with impeccable writing and pretty good direction.

If you’re not a student of American history or an aficionado of the late 1960s, you can be forgiven for needing a quick recap. 1968 was an election year, and at the Democratic National Convention in Chicago, riots raged throughout the city. With the seemingly endless war in Vietnam and the looming election of Richard Nixon, the plan was to disrupt the convention and advocate for real change.

It’s there that we’re introduced to the disparate groups of protest organizers. They are: 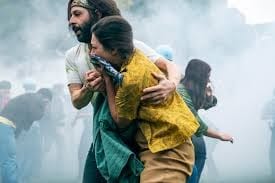 Schultz (Joseph Gordon-Levitt) and Thomas Foran (J.C. MacKenzie) with prosecuting the group for inciting a riot. The good news is that seven of the eight men are represented by William Kunstler (Mark Rylance), a lawyer with a quick mind and an unerring moral compass.

The bad news is that the eighth man, Bobby Seale, isn’t represented by anyone, as his attorney suffers from health problems. The profoundly bad news comes in the form of Judge Julius Hoffman (Frank Langella). Much like certain presidents I could name, the Judge is a man that wields malice and incompetence in equal measure. He has very little interest in Seale’s lack of representation, displays a disturbing degree of bias toward the prosecution, and hands out contempt of court citations like Halloween candy.

If you’re going to check out a courtroom drama, the best-case scenario is for Aaron Sorkin to write the screenplay. Having Sorkin direct is the third or fourth-best case scenario, however. He’s not a bad director, and in point of fact, the first ten minutes is brilliantly edited as we’re introduced to the protagonists. After that, the remainder of the film feels a little too slick and put together. Don’t get me wrong, Sorkin is a talented director. He’s just not the best messenger for his screenplays. When his work is put in the hands of the best filmmakers out there, such as David Fincher’s The Social Network or Danny Boyle’s Steve Jobs, it becomes magic. 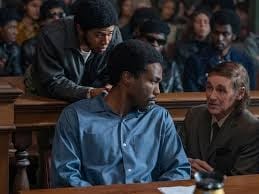 Speaking of Sorkin’s screenplay, it’s rock solid and similar to all of his other work in two aspects. The first is that his characters are almost all impossibly smart people that seem to have a dozen quips spring-loaded for any occasion. One of the reasons we love movies is the elevation of behavior to an almost superhuman level. Ever been in an argument with someone? Ever think of a devastating rejoinder about an hour later? Sorkin’s characters don’t have that problem, and it means that everyone tends to be about five percent too witty.*** The flip side is that if you need someone to take a complex situation with a metric ton of characters and make it comprehensible, Sorkin is your man. He’s the best in the business when it comes to deciphering military hazing rituals, how technology feels to consumers, and the labyrinthine path of the American legal system.

While Sorkin may not be the most exciting visual stylist, he’s in the top tier of filmmakers who get consistently great performances from their casts. His cast here is absolutely ridiculous in terms of talent. The mighty Frank Langella shines as Judge Hoffman, another in his long line of memorable scumbags. It bears mentioning that while Michael Keaton is only in two scenes, his performance as ex-Attorney General Ramsay Clark is a masterclass in making an impression with limited screen time. I could go on about the cast, but I think the yin and yang of Sorkinian performances would have to be Mark Rylance and Sacha Baron Cohen. As William Kunstler, at first glance Rylance seems to be playing a standard Sorkin protagonist, a sophisticate battling for a moral victory. Rylance drills down and shows us the fatigue Kunstler feels toward the mercurial judge and the never-ending trial. He’s also the only performer that makes the quips feel organic, as if he only just thought of them. The most exciting performance is Sacha Baron Cohen’s Abbie Hoffman. Is he ten years or so too old for the role? Yes, and I don’t care. While Cohen might seem to be on the nose casting to play a celebrity trickster, too many people forget how skilled and subtle he can be as a performer. He’s a relentless wise-ass who occasionally opens his armor to show the bruised idealist inside. 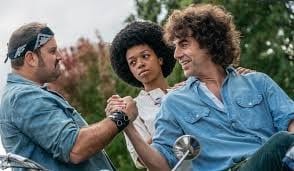 History can be chaotic and messy. Court proceedings can be a chore to follow. In the right hands, though, it can all come together to become an ode to the best and worst aspects of America. While not perfect, I found the excellent writing, a top-shelf cast of actors, and solid direction made The Trial of the Chicago 7 a joy to watch.

*It’s widely considered that one of the most factually accurate legal films ever made is…My Cousin Vinny. Seriously!

**Unless your courtroom drama is set in Florida.

***I would pay good money to see Sorkin make a movie about the Trump Administration, a group of people who think they’re far smarter and more competent than they actually are.

Tim Brennan
Tim has been alarmingly enthusiastic about movies ever since childhood. He grew up in Boulder and, foolishly, left Colorado to study Communications in Washington State. Making matters worse, he moved to Connecticut after meeting his too-good-for-him wife. Drawn by the Rockies and a mild climate, he triumphantly returned and settled down back in Boulder County. He's written numerous screenplays, loves hiking, and embarrassed himself in front of Samuel L. Jackson. True story.
Tagged: Movie ReivewNetflix
OnAlbuquerque.com is a directory and information guide for Albuquerque, New Mexico.
Discover the best of Albuquerque shopping, restaurants, night life, breweries, events, business, outdoors, fun, local life, real estate, transportation, jobs, and schools.
Looking for what to do in Albuquerque? OnAlbuquerque.com has columnists, and bloggers to keep you up to date on the best of Albuquerque, New Mexico.